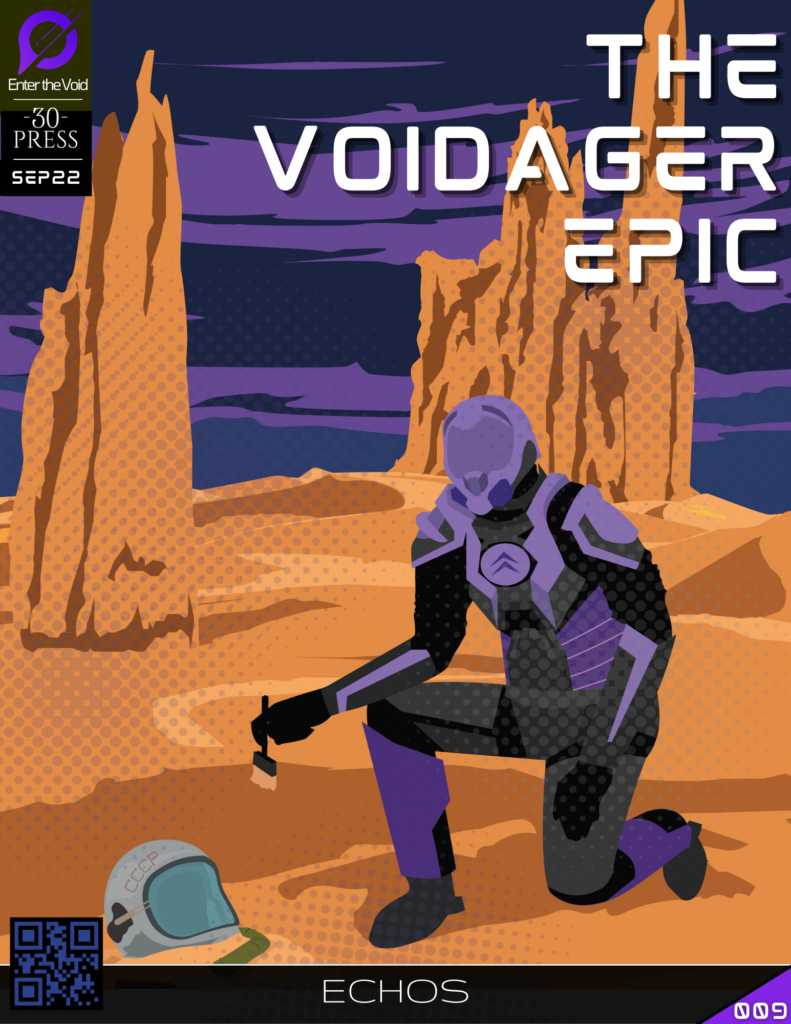 The gnawing stress and sense of unease that accompanied being around large groups of people melted away into the gentle hum of the impulse-engine and familiar feel of the research-shuttle’s controls.

The noise of the instruments gradually blended into the backdrop of consciousness as Ladipo lazily manipulated the holo-tablet that had come to replace the visual augmentation streams from his CogNet nexus.

The light from the shimmering image emanating from the tablet danced across the control console of the shuttle. The asteroid designated Shuriken_001 by small text at the base of the display appeared static in reference to the slight shift and rotation of the shuttle.

“Mostly silicate-based structure, potential mineral deposits suitable for industrial use. Trajectory will soon take it deeper into the anomaly, out of range of the research-shuttle. My exploration will be conducted over 12 hours in order to stay within range of Homestead I.”

Ladipo paused. Running out of breath.

“Topographical analysis indicates anomalous features in several locations. I can’t be sure without accessing the CogNet,–” Ladipo rubbed the nodule in the back of his neck where the nexus was implanted “–but manual analysis indicates the possibility that this was once part of a larger body that contained water. Small possibility that ice is contained inside this asteroid.”

Maybe this will be the one, he thought.

The loud pronouncement from the shuttle’s computer fractured the gentle noise, causing Ladipo to jerk violently.

“You’d think I’d be used to that by now,” Ladipo said, patting the instrument panel of the shuttle affectionately.

The maneuvering of any vessel through a debris field was no journeyman’s task but after 5 months of practice Ladipo found the undertaking to be nearly effortless. With practiced, gentle movements he guided the research shuttle towards the enormous asteroid.

Ladipo interfaced with the navigation computer, locking onto the closest of the topographic abnormalities. The gray surface of Shuriken_001 racing below the belly of the shuttle.

The bridge’s narrow windows provided intermittent glimpses of jagged spires of rock jutting against the encompassing darkness of the void.

The rocks were lost to view as the shuttle spun around, marrying the struts of the shuttle against the surface of Shuriken_001. Dust, dirturbed by the intrusion of the struts, wafted lazily around the shuttle. Ladipo smirked at a particular patch of dust that reminded him of the vapor lounge he used to visit inside the CogNet.

“Yeah yeah, I know,” said Ladipo, hastily pressing the mute command on the control console and activating the communications stream.

“Captain! Good to hear from you.”

“Is it now?” asked Galaton. “If I didn’t know any better I would think that you were ignoring me.”

“No, Sir, just had to set the shuttle down. Landing sequences can get complex out here without a CogNet.”

“Ladipo, why are you not using the automated landing–” Galaton sighed.
“Nevermind, not important. What is important is that Homestead Control said you’d gone back out. I’m worried about you and would like you to take a break from your–” she paused “–endeavors.”

“Captain, I’m fine. Actually, more than fine. Despite the sabotage, Gilgamesh,” Ladipo shook the image of the burning flesh and torn limbs out of his mind’s eye, “and worthless bureaucrats, I’m getting to do exactly what the initiative was supposed to do. Explore.”

“That’s not what I’m talking about and you know it.” Galaton said with a timbre that made him feel formally dressed down, instantly reminding Ladipo why she was a Captain.

“I read your last report from the Kunai Belt. I was willing to entertain your theory, that’s why I fought with Chairman Aquataine to let you continue your exploration after your quarantine. But it’s been months and the most evidence you’ve been able to produce is a simulated model of a dwelling based off of a small crater that looked vaguely like the base of an ancient yurt. A crater mind you, that looks like every other crater.”

“Captain, that ‘crater’,” Ladipo made air quotes even though there was no visual feed, “showed all the signs of being an artificially constructed dwelling! My reconstruction was based on the best information and modeling we can do without a CogNet.”

“Ladipo, I trust you as a navigator but your behavior is becoming more and more obsessive. Fact is, even if there were humans in the void before us, they aren’t here now. Right now, we need you. The Stargazer is still impounded, I’m deflecting all of Klaidçiri’s idiocy but I can’t do it alone; I need you to testify at our hearing. As a specialist vaguely outside the rank structure that the Homestead Council is familiar with, I’m counting on your testimony to teach them how PRIME allocated responsibility.”

“Excellent, I look forward to seeing you back. Homestead Control requested that you stream in when you are en-route back. Dismissed.” Galaton ended the stream.

Ladipo slammed a nanofiber-covered fist into the rough metal of the bridge’s bulkhead door.

For several minutes, the only thing audible was the low-steady thrum of the instruments and Ladipo’s breathing. A slight nod of the head and Ladipo stood, moving through the bulkhead door and into the main cabin.

Ladipo began assembling and inspecting the equipment he had prepared before leaving Homestead I.

Say what you will about Homestead’s laws but at least they keep the equipment in good condition, he thought.

The silver disk underneath Ladipo’s boots opened, initiating a peaceful drift to the surface of Shuriken-001.

Breathe, check, activate, he thought. Running his hands from the edge of his helmet seal to each piece of equipment, the movements of his hands illuminated by the soft purple glow of the Navigator insignia on his chest plate.

He willed the downward thrusters to activate and speed his descent to the surface.

He allowed himself to bask in the moment as he descended. His eyes expectantly, almost reverently, taking in the area. Outside of the CogNet, and the refuge of his holo-tablet screen, this was where he felt most at home.

It did not matter to Ladipo that the place he now stood was shades of gray, colorless rock; it was new to him.

The spires of rock Ladipo had seen from his brief view in the shuttle now seemed slightly less impressive. Each spire was roughly 15 meters tall and 3 meters at the base, tapering to rounded points at the top, like giant stalagmites.

How did these form at all? Ladipo wondered. There shouldn’t be any solar winds, dust storms, or anything to make these formations. Maybe this was a piece of a planet or moon?

Immediately, the gray landscape transformed. Flurries of blue, green, orange, and purple danced into being, each color indicating the presence and quantity of different elements.

Ladipo read the constellation of colors like a map, searching for the tell-tale pattern of minerals that indicated water had once flowed freely over the area.

He explored for several hours, wandering closer and closer to the spires, meticulously cataloging the minerals and formations of the place, yet still seeing no trace of any previous liquid water.

Ladipo sighed. On to the next site, I suppose.

The edges of his vision flashed a dull red, indicating a potential environmental hazard.

The vibrant colors of the spectrometer began to fade.

“By the Great Recursion–” Ladipo gasped.

The three spires to Ladipo’s left had erupted in swirling purple and white energy, flowing from the ground near the three spires up the edges of the spires and shooting off into the void for as far as Ladipo could see.

At first glance, the swirling masses of energy appeared to be flowing, projecting energy out into nothingness. A more careful observation indicated that the opposite was true. That the strange pearly-violet particles were flowing down over the spires.

The energy at the base of the spires swirled and pulsed upwards giving the optical illusion that it flowed from the ground.

“What am I looking at? Cosmic radiation? Dark matter?” Ladipo asked.

“UNKNOWN, THE SIGNATURE APPEARS TO FUNCTION IN THE ELECTROMAGNETIC SPECTRUM BUT BEHAVES LIKE A FORM OF PARTICULATE RADIATION. THIS SPECIFIC RADIOLOGICAL SIGNATURE IS NOT RECORDED IN ANY CASC DATABASE.”

“Arindin!” Ladipo swore at himself. “I need to get to a safer distance; will my suit’s shielding hold?”

Ladipo began to turn. Intending to move towards the shuttle. Suddenly, a pulse of amethyst light began extending outwards from the spires, speeding toward Ladipo. Gaining on him…

He braced, clenching his eyes shut.

Slowly, he opened his eyes.

Two columns of the same fiery heliotrope energy had appeared where the spires met the ground. Each column bent towards the other at the top, forming an unmistakable shape.

Ladipo’s heart exploded as his adrenaline caught up.

He closed his eyes.

He opened his eyes.

The archway was gone. Descended back into the pool of undulating amethyst energy.

Did I imagine that?

He willed another verification that the suit’s shielding was adequate.

What kind of navigator would you be if you stopped now?

He steeled himself, heart pounding in his ears as he walked toward where the archway had appeared.

Ladipo edged closer, he could now see something beyond the energy. A small opening at the base of the spires, rough and natural in appearance. Barely big enough for a man to walk upright through.

Whatever the energy was, it appeared to be unable to enter the opening; bouncing off of the edges as if some force prevented it from entering.

He could feel the muscles in his legs quiver. Ready to jump back at a moment’s notice. To run.

He turned off the augmented vision of the filter and scanner.

The world turned back into a gray, unremarkable landscape. The opening, which had just seconds ago appeared in wild contrast to the rippling flows of purple and ivory, now appeared barely visible against the gray of the spire.

Ladipo could now see that it extended downwards, beneath the spire into a cave of some sort. He tethered himself to the ground with the titanium safety line on his belt and began the descent into the cave.

The path down was not steep and only descended a couple meters, terminating in flat ground.

The cave, illuminated by Ladipo’s light, turned out to be a small chamber, semi circular in shape, and no more than three meters high but with walls remarkably smooth in contrast to the rough landscape outside.

This is it. This is just like the model from the Kunai belt.

On the walls of the cave were strange hexagonal symbols, glowing the same purple hue as the energy on the spires above. Yet these appeared more stable, static in emmenation and shape, devoid of the swirling-dancing alabaster elements from the exterior.

They started at the bottom of the cave wall, moving from the entrance around the circumference of the cave until the exact center, where they ascended in a narrow pillar of characters towards the peak of the cave ceiling.

Ladipo took a shaky step towards the vertical stream of characters. The emergence of the symbols had illuminated a silvery object in the ground, no bigger than a fist. Shadows of purple played off the object like a wash of fire.

Ladipo knelt in front of the object.

This is it. This is my proof, Ladipo thought. He took a titanium multi-tool from his belt and gingerly, almost reverently, brushed away sediment and rock from the object.

Dust yielded under the pressure of the tool.

“Homestead, this is NL-001,” Ladipo said, fumbling with controls on his wrist.

“We are going to need a full archeological team here; we are not the first ones in the anomaly.”