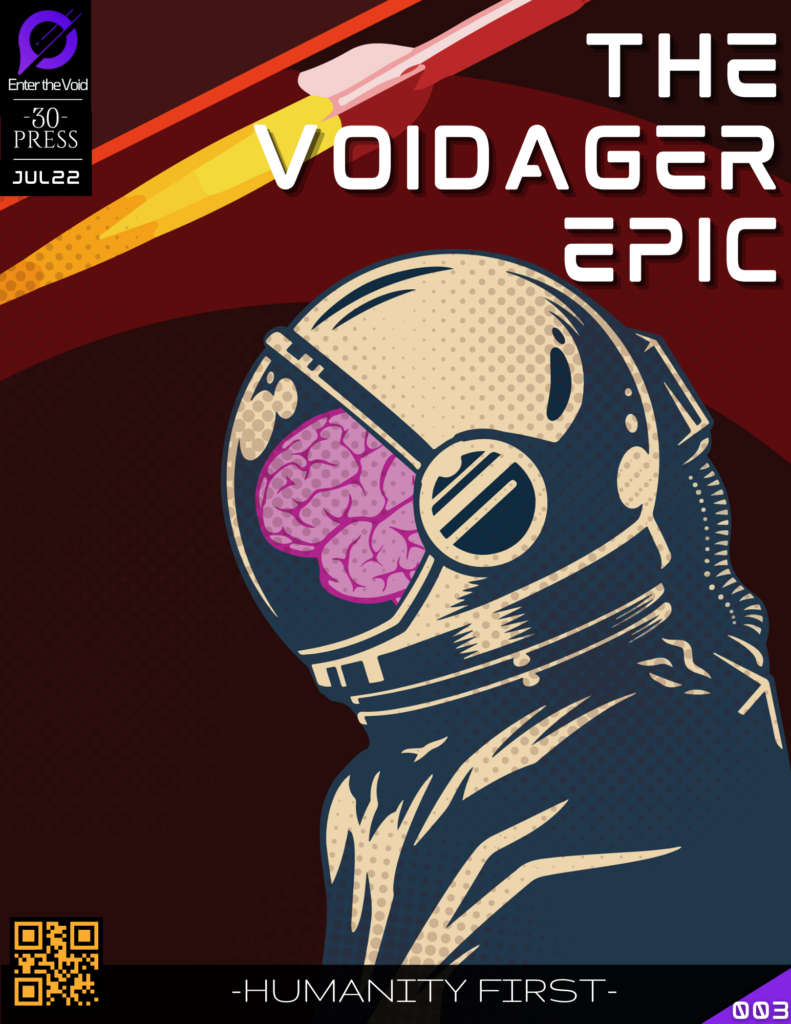 Meli hurried along the clean, well-maintained corridors of the CPU, the crisp Nordic air helping him keep the quickness in his step; a journey he, under normal circumstances, used to take in slowly to enjoy.

The complex included Earth’s Global Seed Vault, Extinct DNA Storage, and one entrance to the CPU on the small island of Svalbard. An insurance policy to repopulate the Earth should an inescapable catastrophe befall Earth. With PRIME, that was unlikely. But still possible, especially with the threat of the unknown Void looming.

Meli’s dark blue CASC-issue coat was coated in gray dust at the hem of the trousers and along one arm where he had leaned against the bulkhead of a cargo freighter. It shouldn’t have been a long trip from Ceres to Earth with the jump gates but the line of ships waiting to enter the gate was unprecedented.

Earth was a hub for freighters like the one Meli had caught a ride on, moving parts and raw material from the outer stations to Earth where the Stargazer—one of two ships for the upcoming Voidager mission—was being assembled in orbit.

Meli chuckled to himself realizing that PRIME and Kazumi’s joke name for the mission had become engrained.

Meli batted at his sleeve, which only seemed to drive the dust deeper into the threads. He cursed to himself, then glanced up at the footsteps approaching him from the other end of the hallway.

He straightened, slowed to a pace more fitting for an officer, and nodded at the CASC recruit.

Did they hear me? Meli wondered.

Then he realized he didn’t care and was far enough away to pick up his pace once more.

Meli tried licking his fingers and brushing at the stain on his sleeve. It had faded minimally but spread considerably by the time he entered the PRIME CPU and activated his CogNet meeting.

“Sorry I’m late,” Meli said, turning his attention to his wild hair and trying to smooth it down.

Kazumi looked pleased, eyes crinkling from the large headrest and wingback of what looked like a ship captain’s acceleration chair.

Right, Meli thought, PRIME sent Kazumi to oversee the construction of the Agamemnon above Mars.

A robotic smile was pasted on Beldon’s face as he avoided Meli’s gaze.

A memory flashed into Meli’s mind to a time when he and Beldon gave each other a high five with the backs of their hands. They had perfected a CogNet virtual meeting version of the same high five where they positioned themselves at the edges of their meeting spaces. It looked to everyone else in the meeting like their hands had melted together.

Then he noticed a fourth person in the meeting. Someone wearing white coveralls a size or two too big. An engineer from one of the technological enhancement facilities? Or—

Is she actually here in the CPU?

“PRIME, do we have a guest for the meeting?” Meli asked.

“No, Technician Jankowicz,” PRIME said, the ethereal voice coming from seemingly everywhere in the CPU at once.

Meli scratched at the stubble on his face. Then turned to Beldon who, surprisingly, looked his way and gave a resigned shrug.

“I am PRIME,” the woman said. “Or, as Technician Kazumi Ito pointed out, we are PRIME squared.”

A bank of lights in the CPU flashed green as Kazumi chuckled.

Meli raised an eyebrow at Beldon, who merely shrugged again.

“Kazumi, you work with the most advanced AI in the history of humanity and you taught it math puns?” Meli asked.

“Math is a language with which I am very familiar,” PRIME said through the CPU speakers. “I might even think of it as my first language. Puns are just a natural emergence with mastery. They’re force multipliers.”

“No. No, no. That’s enough. Was this,” Meli gestured toward the woman who had claimed to be PRIME, “all just part of a bit?”

“No, Technician Meli Jankowicz. Immediately after the conclusion of the Voidager Challenge, Technicians Kazumi Ito and Beldon Pritchard were concerned with the theme of some of the questions.”

“I remember,” Meli nodded. “You used a lot of the history I had uncovered.”

Kazumi leaned forward in his chair. “But not everything you had researched. Your deep dives into ancient music and architecture didn’t make the cut. Only space. And only some pretty foreboding stories of early space travel.”

“It wasn’t what PRIME planned out and had me look over. I thought he was improvising from interactions with the cadets but, when I asked, it—uh—wasn’t that simple,” Kazumi said.

“I had no logical answer for the directions of my thoughts,” PRIME said.

Meli finally made his way to a chair at the large table, absently fiddling with the sleeve of his coat. “Well, you know this, PRIME, but you’re a sentient being just like the rest of us. Sometimes ideas just pop out of nowhere.”

“True, Technician Meli Jankowicz. I do, indeed, have novel ideas. But I can trace these ideas back to an increase of entropy in my neural architecture. A novel idea cannot be predicted but I can identify the events that give rise to them. The decision to bring in your research about the Hawking probe, for instance, did not stem from a cognitive event that should have produced novel reasoning.”

“I suggested,” said Beldon, “that it could be the emergence of a new form of creativity.”

Kazumi shook his head. “It does but it doesn’t. If PRIME was entirely non-human, I might agree with you. But PRIME’s original base code used the human brain as a footing. And PRIME is now made up of billions of individual human brains. PRIME is more of a cyborg than an android. You’d expect to see PRIME’s brain function like humans.”

“And we do,” PRIME continued, “see that human brains begin to fall out of synch and exhibit a number of catastrophe flags before arriving at a moment of insight.”

“I could be vulnerable to influence from outside actors,” PRIME said. Though PRIME’s voice was synthetic, it had a darker edge to it.

“And I’m guessing,” Meli said, “you don’t mean hackers. Human hackers. Corporate hackers. You mean something from the Void.”

Evelynth stood in the kitchen of Beldon’s quarters, her hair still wet from the shower.

She had cut herself when she hit the mirror and then passed out again when she tried to stop the bleeding.

She came back to herself to find two more rows of Slavic characters written in blood on the tile countertop:

Meli had asked her to serve as the head Bio-Corps clinician on the Voidager mission.

She turned him down.

PRIME had asked her to consider joining the mission as well.

She turned down that offer, too.

Now something else was trying to get her to go.

What? Her subconscious? A ghost?

Something with red eyes.

Evelynth shut out that final thought.

The dreams or visions or whatever she half-remembered after her seizures were just side effects of a different problem.

But the writing was real.

Three episodes in one day. More than she had ever had before.

She wondered if she would ever feel peace if she didn’t go on the Voidager mission.

“That’s not great but I’m still not getting the, uh, her,” Meli pointed to the woman in white seated across from him who was staring blankly at the floor, the sleeves of her coveralls draping past her hands and giving her the look of a child in a parent’s coat.

The head snapped up to look at Meli.

“I am a second pair of eyes, for lack of a better term,” the woman said. Her voice didn’t match PRIME’s in pitch but she did share the AI’s intonation.

“While I can trace back my thought processes,” PRIME, what Meli thought of as the real PRIME, said, “it’s difficult for me to do so at the moment they’re happening. Observing the birth of an idea takes one out of the experience, even when you have essentially limitless resources. It could be something of a Heisenberg effect: you can experience the thought or observe its creation but not both. Perhaps it’s a quantum observer effect. Whatever the case, this is a security breach in my programming.”

The woman stood. “Bringing one of the people who are donating resources to the CogNet online as a second, distributed self, however, could help. Essentially, I download a specific subroutine to this body, then disconnect it from the CogNet temporarily. I am me but I am apart from myself. And now I am a second hyper-intelligent, though resource limited, entity who can observe the decisions I make. I am more capable of running the available information forward to judge if I am being influenced than any other human or computer.”

Meli sat back in his chair, he winced and shook his head as he swatted away various ideas that ran through his head. “But we’re still playing defense only.”

PRIME’s bank of lights flashed yellow. Meli didn’t know what that meant but he glanced toward Kazumi, who smiled.

“Now,” PRIME said, “that I know I can inhabit someone on the CogNet—who, by the way, consented to this for a respectable compensation—I can prepare one of the cadets who solved the Voidager challenge. I’ll send myself into the Void for 24 hours then disconnect from the cadet. I may learn what is on the other side. And how it is communicating with me.”

“What was that?” Beldon asked.

“I am unsure,” PRIME said. “My probes and connections to the Agamemnon have also been disconnected. It is unusual that all communications and sensors have been deactivated. There are no solar flares predicted for this time. I will find out more. Please stand by.”

She asked for Meli and Beldon to contact her immediately.

“Let’s connect with her while PRIME brings Kazumi back online,” Beldon suggested.

Meli, who had already started a connection to Evelynth before he finished her note, nodded.

Evelynth swirled into the CogNet space that had been occupied by Kazumi. Her hair was wet. Eyes red and welled with tears. She had a bandage on her palm.

Evelynth looked out into Beldon’s apartment and away from either man’s eyes.

“I have to go on the mission,” she said.

Evelynth nodded and was then cut short and replaced with another transmission.

“I am sorry to interrupt your call, Technicians, but there was an accident at the Agamemnon construction site. The new gravity projection drive was activated prematurely. The result was catastrophic. The Agamemnon is no more. I have every possible camera and probe in the area searching for Technician Kazumi Ito but I fear the worst.”