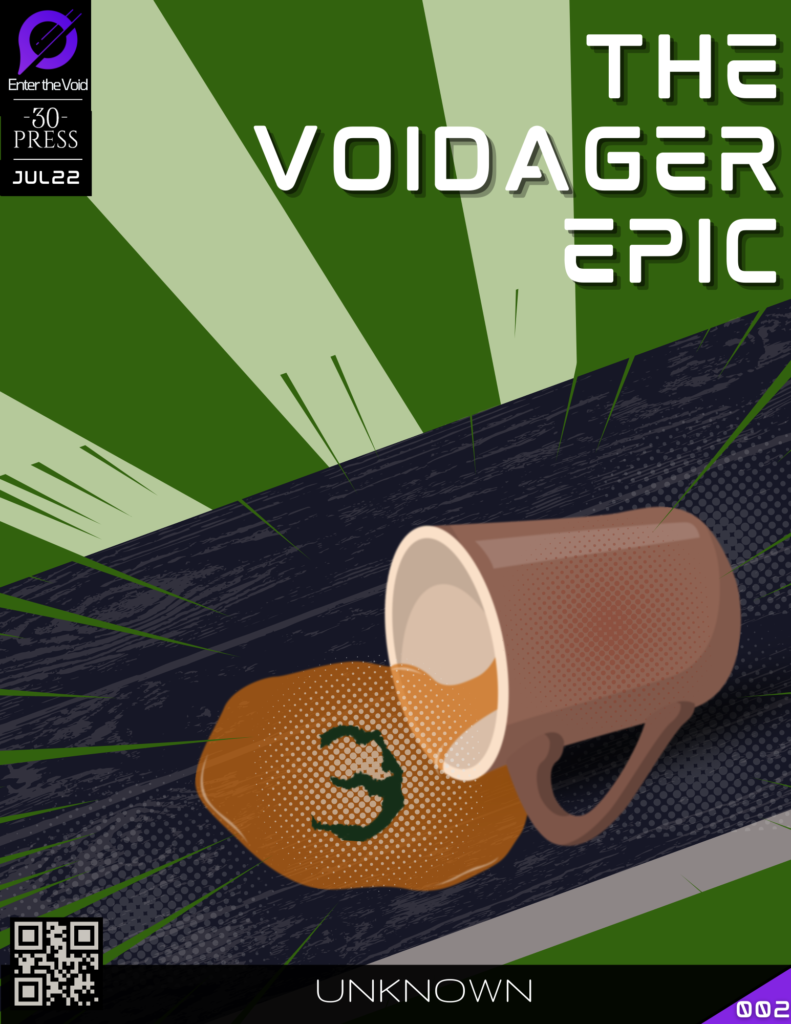 Her mug had toppled over, sending tea cascading across the coffee table. Bitter, rusty drops fell onto the low-pile green rug.

Damn. She’d have to wash it.

Evelynth extended a finger to the mess.

Evelynth existed in that moment for some time.

Thoughts of the past.

The journey here. To this couch on this orbital station. To this life.

She hadn’t been out too long.

Evelynth’s episodes had always been a little different.

The Bio Corps clinicians her parents had taken her to as a child were certain they were seizures but they didn’t match the textbook symptoms of any specific type. Like a petit-mal seizure, Evelynth never convulsed or was in danger of swallowing her tongue or thrashing against objects. But, like a tonic-clonic seizure, she often felt a haze come over mind right before and after she went out.

Nothing she could recall exactly—images, feelings, and colors like a glimpse of a dream.

Even though the Bio Corps CogNet could accurately predict the manner in which symptoms would express themselves for different genotypes regarding known diseases, Evelynth’s symptoms had appeared as a surprise to her clinicians.

Her symptoms, according to the Bio Corps CogNet, should not exist.

The seizures came more frequently as Evelynth aged. She’d had a few seizures on Earth, mostly when she was young, but now, in her early 30s, they’d grown from a strange novelty to a nuisance. The memory of her visions were uncomfortable. Oppressive. It wasn’t exactly the same as not being able to breathe but it was similar in an ethereal way that Evelynth couldn’t place; like her ability to think was being smothered.

She sighed, standing from the slumped, half-seated position in which she’d awoke and walked to the kitchen for a rag.

She had hoped the episodes would tone down when she left Ceres. There had been a definite increase in cases where she’d lost time when she and Meli moved into their first apartment on the orbital station.

Meli had been such a romantic when they first moved; bringing Evelynth tea while she studied, walking the paths of the large park that provided the station with oxygen and gave the inhabitants a much-needed reprieve from metal bulkheads.

And then Meli started digging into Earth’s history in his free time.

He snooped while she read her textbooks and, within a few months, Meli sequestered himself in his office.

They saw each other less and less; each like a ghost inhabiting the same place at a different time.

Meli started working on his projects until the early morning, falling asleep just before Evelynth woke up for her rounds at the Bio Corps facility.

They argued often—or, as often as they could without having regular contact—leaving Evelynth drained and despondent.

PRIME reassigned Beldon to Sirius and Evelynth went with him.

And because there was an opening at the Bio Corps facility on the station.

They had all been friends first.

Beldon sat next to Meli in CASC Orientation. When Evelynth turned to shush their incessant discussion of the most recent Rohalunge luxury transport product announcement, they turned their attention to tossing small balls of paper at her back like grade schoolers.

Beldon and Meli spotted Evelynth and her roommate Sage at mess and sat with them. They claimed it was the only free table but Evelynth spotted two completely empty benches. She didn’t press them on it and that’s how things stayed for the next four years; but now the rug she’d ruined was Beldon’s.

It was his tea, too. She lived in his quarters more than her own.

She’d hoped getting away from Ceres—from Meli—would provide stability and ease the seizures.

Evelynth almost dropped the rag as she walked back to clean up the spilled tea.

Her notebook lay open on the couch next to where she had been sitting before the seizure, flipped to a fresh page. A shape had been scrawled on it with a tea-stained finger. The paper bunched at the edges of the tracing, the strong tea staining the paper and swirling the blue ruled lines into minute galaxies. The character looked somewhat like a 3 or a backwards C with a horizontal line through the middle.

Had she drawn that during her seizure?

Evelynth cleaned the mess and tore the soiled page from her journal but the haze from the seizure stayed with her the rest of the day, making her feel like she was experiencing the world through radio interference.

A chime sounded in her CogNet and she sent Beldon’s video communication to her visual feed.

Beldon smiled. “Ev,” he said, the den where Evelynth sat melting gradually into Beldon’s office at the Deep Space Observation Unit. Pixelated blinders over classified readouts in Beldon’s office were the only indication that they were in a CogNet video feed and not an actual physical space. “We’re discussing the results of the Voidager screening with PRIME right now. I think I’ll be at least another hour. I’m sorry.”

“It’s OK,” Evelynth said, glad for more time she didn’t have to try to be normal through her mental fog, though spending another lonely night on a distant orbital station wasn’t ideal.

“Eat dinner without me. See you soon!”

Beldon waited a beat before giving a slight wave and switching off the video.

“See you—” Evelynth started before realizing the call was over. She was exhausted.

Evelynth decided to skip dinner, take a hot shower, and go directly to bed. As she stepped out of the shower into the steamy room, her mental haze grew stronger.

Evelynth came back to herself holding the sides of the sink for support.

On the mirror in front of her were more of the strange characters like the one she had drawn in her notebook. Seeing more of them together jogged a memory. They looked like Slavic script.

Evelynth considered ignoring the words and heading to bed but, as she glanced into the bedroom, two lights on Beldon’s antique, pre-war stereo glowed red.

Something about the lights in the darkness involuntarily tightened Evelynth’s chest and made her feel queasy. The oppressive memory from her earlier seizure hit her again with more force.

She turned back to the words on the mirror in the brightly lit bathroom.

Evelynth took a breath to calm herself. She connected via CogNet with her old roommate from CASC cadet school who had read regularly from a religious text written in Slavic.

“Sage, can I ask you a quick language question?” Evelynth asked.

“What does this say?” Evelynth turned her gaze toward the mirror and sent it across the video connection.

“Uhhh,” Sage said, yawning again. “Dang. That’s not Modern Cyrillic. It’s old. Like, pre-Slavic Republic old. So, let’s see. Well, it says Evelynth at the top, or at least it phonetically spells out your name. It says: ‘Evelynth. Find me. Help me.’

“I have to go, Sage. I’m sorry. I’ll explain later.” Evelynth shut off the connection.

She stared at the words on the mirror, watching drops of condensation drip from each letter.

With a curse, she slammed her palm into the mirror, wiping the message away and leaving a crack in the glass.