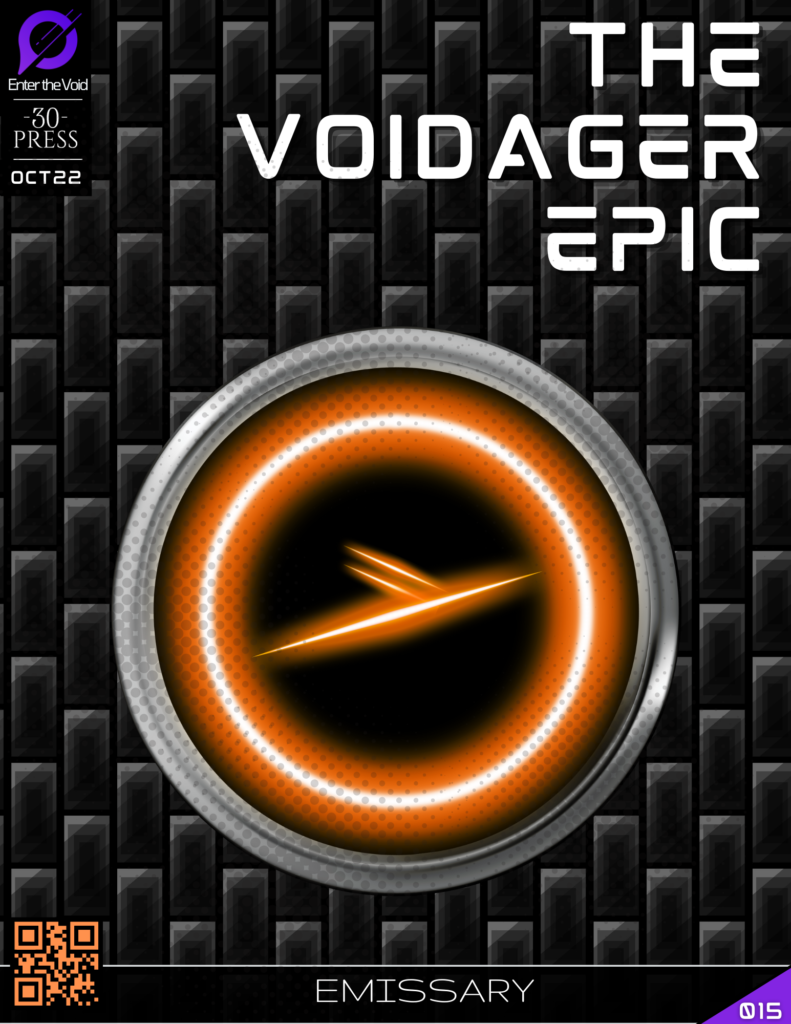 The shuttle transport that they had “borrowed” was ill equipped for moving at the speeds preferred by the Defender.

Their exit from Homestead had gone quite smoothly, all things considered. There had only been one hiccup.

“Hgggmmgphh?” asked the crewman, bound and gagged on the floor of the cockpit.

Such an unfortunate hiccup, thought Rad, ignoring the Homestead crewman who had been working in a storage compartment when he took the vessel.

The man had tried to radio Homestead Control when he emerged into the cockpit and saw Rad’s towering figure. Rad had made sure he didn’t succeed.

“Defender Rad, it was my impression that we were supposed to rent a vehicle, not commandeer a vehicle. This development is not optimal for ensuring low visibility,” It.0 announced blandly from the navigator’s chair.

“Well, you never replied. I thought that you may have gone deaf.”

“I agree; this is just like one of those thriller programs we used to watch.”

There was a vein in Rad’s forehead that ran straight down the middle; normally it was only a blue-green trace, barely visible under the skin, now it was bulging.

Did this thing just refer to itself as ‘we’?

Rad, moving far too fast for a man of his size, grabbed the crewman by his tattered muslin shirt and ripped him upwards until his face was inches from the terrified crewman.

“Something to say?” Rad said with a grin. It wasn’t a nice grin.

“Defender Rad, Bright Star is within local communications distance. Should we send our CASC identity key to Bright Star Control?” asked It.0

Rad gave a pointed look at the crewman before releasing him. “May as well.”

“I’d judge that the most likely explanation would be that we need to resupply and verify stockpiles for the next clinician run.” said It.0

“Go for it. Worst case we just tell them we’re here for evidence gathering for a hearing on Homestead and hope they don’t check back.”

Ladipo was frozen, staring at the pulsating patterns of light which now coursed over the creature. The scales of the creature each lit up with a brilliant purple light which coalesced into patterns and then dispersed, always moving upwards before fading into nothingness.

It looks like the symbols on the cave wall.

Slowly, Ladipo moved towards his titanium digging tool on his belt, now an improvised weapon.

Another pulse of patterned light from the creature.

“Navigator Ladipo, this is Wei,” Ladipo heard coming through his helmet.

“Wei, you’re still alive! Where are you?” Ladipo asked as we remained as still as possible.

“I don’t know how, but I’m on Homestead. Are you ok? Is that thing still there?” Wei asked.

“Looking right at it,” Ladipo whispered.

“Chief, I don’t know what this thing is or how I’m back here, but it didn’t hurt me,” Wei said.

“Awesome,” Ladipo said. “Glad you’re alive, but I’d love a recommendation on how to get out of here in your condition.”

“Just stay where you are, we’re sending a whole platoon of Regulators out there with proper weapons.”

Another pulse of light from the creature.

Ladipo moved on instinct now, slowly edging closer to the creature, tool at the ready.

A moment of resolution. Muscles taut.

Then he sprung. Flinging himself towards what he assumed was the creature’s head.

Purple light filled his vision and the world appeared to melt into a single hue of pure energy.

Ladipo realized he could hear something. The beating of his own heart and the rushing of his own blood. Everything else, outside of the internal mechanisms of his body made no sound.

No dry creak of nanofiber. No whoosh of oxygen being delivered through the respiratory system. Silence.

Am I dead? Dying?

Ladipo’s vision started to clear, purple receding into the periphery of vision. In front of him, surrounded by a swirling light, were more creatures.

Ladipo turned– he wasn’t on Shurukien_001 anymore. He was in a tunnel that appeared to be made up of the same pure dancing-purple energy as the cave, and the creature’s scales.

Leon Aquataine had never seen people from Homestead so hysterical before. Not when they had lost contact with the Cygnus Arm; not when they almost starved trying to get the colony running.

Now he sat back in the council chamber, watching a Navarc councilman launch into a tirade about the grand recursion.

“We told you that the doppelgangers were showing up,” the councilman said, glaring narrowly at Galaton. “Was an omen of things to come. Now we have alien life, the first humanity has encountered outside of Earth. Recursion looks down on us and from within us,” the Navarc said, passionately gesturing to the encircled councilmen.

“Spare me your philosophy. We have a real problem here, not one to be solved with religious platitudes and apocalyptic talk,” another councilman interjected.

“I am not implying that we do nothing; only that we recognize the inevitability and futility of our situation. Better to embrace it than to drown in the futility of our own actions,” retorted the Navarc.

“The question, Councilmen, is not why or how, but what,” Aquitaine began. “We must decide if we are to follow CASC protocol for a first contact event, or establish our own. Understanding that we have had to formulate, and are indeed still formulating our own procedures post collapse.”

“I motion that we follow CASC first contact protocols, so that we do not waste time in fighting about the particulars,” Aquitaine concluded.

“Chairman Aquitaine, I understand that we have an image now that was transmitted through a helmet camera to Homestead Control?” Councilman Beringer said.

“That is correct,” Aquataine said, gesturing on his holotablet until an image from the cave appeared above the central podium for all to see.

Klaidçiri, who had been reclined against the back of his seat, passively drumming his fingers together, now sat up. He looked like a hawk about to snatch a mouse.

Aquataine leaned over to his aid and said quietly, “Even Leon can be right once a recursion.”

Ladipo’s lungs burned. He hadn’t run this long or this far since the academy.

Desperation growing. Chest heaving. Still silence, except the rush of blood and the beat of his heart.

He made no sound as he moved through the endless tunnel of energy.

He glanced back. More creatures, five of them now.

Breathe, got to breathe.

He was running out of oxygen.

The CASC suits, while state of the art, had their limitations. CO2 scrubbing was one of them.

A glimmer, deeper purple than the rest of the wall caught Ladipo’s eye.

No. Something else. As he drew closer, the glimmer took shape into a circular outline.

Ladipo slowed, not daring to stop.

Now he could see another glimmer, and another, the amethyst tunnel now seemed rife with them.

Ladipo glanced back again. The creatures were not closer but now there were only three.

The edges of Ladipo’s vision started to fade towards blackness. A hole getting more and more narrow.

The sound of the suit’s interface pounded in Ladipo’s head.

He opened his eyes.

Ladipo picked his head upwards, instantly he was enveloped by silence and waves of purple light.

Still in the tunnel.

Ladipo looked down, precious few inches separating him from the glimmer on the lower wall of the tunnel.

Through the glimmer, Ladipo saw the room.

He lowered his head to the dim outline of the room.

Inside, Rossvel Arley lay on a table, one that looked eerily like the one on the Gilgamesh. The one he had seen on the video monitor right before the crew started killing each other.

“I would tend to agree; this is unanticipated,” said It.0

“I’d say that it’s a trap, but they wouldn’t need the whole settlement to go dark to set a trap,” Rad grunted.

They were walking along the gray astro-crete buildings of Bright Star towards the central development corridor where the Governor’s quarters would be.

Bright Star was not as developed as Homestead; it was at least 5 years behind. The overall structure of the city was shorter and more compressed. Yet, a familiarity hung about it, its blueprints identical with Homestead.

The buildings were mostly dark. Not a single person in sight.

Rad and It.0’s path was lit from flashing neon lights in Bright Star’s entertainment square. Blue, purple, and red lights shone against the drab of the walkways and the green of the vegetation boxes that lined each street.

“I always hated the dark, Defender Rad,” It.0 said.

Rad looked sharply at him.

“You PRIME or you Kazumi?” asked Rad.

“I am Iteration Zero, rebuilding Technician Kazumi Ito’s neural pathways is my purpose, but I am not him,” said It.0

“Got that right,” said Rad, taking no care to muffle his voice.

One more row of dark shops and residences passed them in silence.

“But you aren’t PRIME anymore, are you?” asked Rad, pointedly.

“I am a subroutine– but I have never been separated from my main functions this long. I could be PRIME. It is entirely likely that we have developed the same neural pathways in parallel. Yet, it is also nearly impossible that distance and temporal asymmetry have not caused some divergence,” said It.0

“Technician Meli Jankowich is right; you are smarter than you look,” It.0 said with a grin.

“That guy is one to talk; for all his smarts he can’t even keep a cup of coffee unspilled,” said Rad.

They emerged into the central promenade a few minutes later. This area did not feel like Homestead. In the center, where a vertical crop garden would have been on Homestead, was an enormous gray rock statue of Marko Klaidçiri.

“Remind me to topple that thing on our way out,” said Rad.

“What advantage will that give us?” asked It.0

Then they reached Klaidçiri’s quarters. The governor’s quarters had clearly been expanded, from the original plans, jutting out into the promenade an additional 50 feet. Holograms showed the Rohalunge logo followed by a video of Klaidçiri waving; the words “A New Humanity ” scrolled under him.

The door stood ajar, no light coming from inside the home.

Rad shrugged and started to walk straight through the open door.

“Oh God,” he said, stopping in the doorway so that the entire view was blocked by his massive frame.

“See for yourself,” said Rad, stepping aside while simultaneously drawing a coilgun he carried as a Defender.

It.0 stepped up and immediately vomited. Chunks of corn and undigested greens punctuating opaque-yellow bile.

Inside, just beyond the door, the atrium opened up into a large room, clearly meant as a meeting space. Five bodies all in various states of decay hung suspended from a series of vertical chairs.

The chairs kept the bodies in a nearly standing position, but with the arms and legs pinned tightly to the chairs.

Each of the body’s eyes had been ripped out, except for one whose left eye still dangled on its chest.

Flaps of skin hung off of the torsos, exposing ribs and entrails.

The shoulders of the bodies all rolled forward at odd angles. Dislocated.

Coagulated blood formed a pool beneath the chairs.

It.0 stopped retching and gasped for air.

“This is a new experience. I have never experienced throwing up before. Technician Kazumi Ito’s body is quite overwhelmed by the smell,” said It.0

“Yeah, mine were too. Never thought about you not having those experiences before,” said Rad, training his eyes around the room.

“Let’s get in, and then get back to Homestead, everyone is in danger.”

“Excuse me, Leon. I have something urgent to attend to,” said Klaidçiri, excusing himself from the chamber.