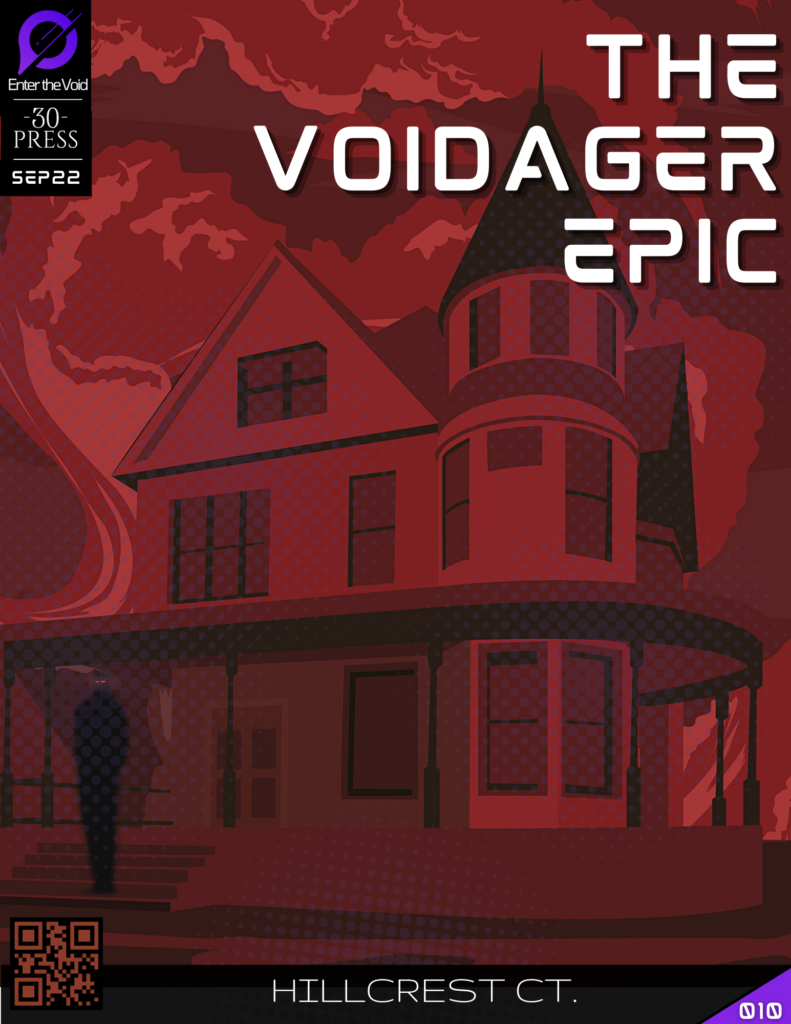 She sensed that she was alone.

Bonn sat up slowly, observing what she could.

The room was ancient. She remembered studying structures such as the one she was in when her parents took her to view museums of the past through her CogNet studies.

It must have been an eighteenth or nineteenth century dwelling, updated to twentieth century technological standards.

Her eyes glossed over a small rectangle in the wall with a string or cable extending out of it. Bonn’s eyes traced the string from the wall to an elongated glass tube full of vibrant blue globules suspended in a glowing golden liquid.

Bonn was not used to being alone.

A scream had awoken her, but she could not hear anything.

No creaking of hulls.

Of course not. She was terrestrial. Home. On Earth.

She got out of the mass of bedding she had been lying in and found some clothing in the nearby nook.

When she made it to the primary exit she first peered out of the window to see if any observations would lead to more clues as to the reality of her surroundings.

She wasn’t supposed to be there.

But she was also home.

She closed her eyes to recall where she was more clearly.

Hell was a dark place filled with the breath of many colors.

The cries of children interspersed with the eyes of some sort of being.

Eyes peering directly into her—

Reality bled in and faded into the simplicity of being.

She opened her eyes to look outside.

No one wore any breathing devices.

She took a breath and exited her dwelling.

There was something missing.

A cog. Or something of the sort.

She stood there a moment, attempting to piece together herself.

The moment and memory passed.

She was where she belonged.

The bleeding together of colors from nightmares faded.

It was difficult to recall the dreams. Whatever they were. The thoughts fizzled together with memories of the night prior.

She had partied hard with her girlfriends.

There was a lot of wine. The horrible stuff full of sugar, which her head now was absolutely rejecting.

She had danced with—someone. That part of her memory was too patchy.

Bonn looked around her neighborhood. The sun was beaming down, but somehow there was also a thick fog that kept the horizon out of sight.

She now could hear insects, birds, and see butterflies wafting through the air like floating flowers of technicolor.

If she had danced with someone, she likely ruined it like she ruined everything. A snarky and overly nerdy remark that wasn’t as funny as she thought it was. Trying to take care of someone who didn’t want the assistance.

The observant doctor in her was incapable of seeing her own actions the way others saw them.

Always too direct for her own good.

Maybe she was too forward the night before.

Maybe there wasn’t even a dance partner and her loneliness was just somehow manifesting itself.

It was probably time to lay off the wine.

Or it was probably time to drink something with a little less sugar.

Bonn looked around to gauge what she should do with her day off.

How could she forget?

Bonn sat across from Susan. Who was sporting a new bob haircut.

“It didn’t really matter that much in the end, though.” Lisa chimed in.

Bonn looked at the book clutched in her hands.

“I thought it was good,” Bonn paused, wanting to join the conversation. “Though, to be honest, I didn’t finish it last night.”

Lisa giggled. “We all know why.”

“What? It’s not like we weren’t all there the whole time. I’m—” Lisa trailed off.

Bonn half-noticed a darkness fill the periphery of the room.

The sound came from where Lisa’s body was but not from her mouth. There was a sonorous boom that shook from her chest.

Then the moment passed and Lisa smiled.

“He was just so handsome,” Susan said.

The dark clouds that had been pushing in around the edges of Bonn’s vision lifted.

The rest of the book club continued like normal: lots of laughter. Bonn left a few hours later feeling light.

She turned on Hillcrest Court like she had done a thousand times before.

But that’s when she saw it.

Some sort of dog or cat.

Black. No, not black: nothingness. A cutout of reality.

Crouching over the crest of a bush, staring at her just above the leaves.

She quickly scanned her surroundings.

No cars. The people appeared to be ignoring the lifeform; the creature.

She looked over her shoulder to see if anyone else was responding to the creature. She looked back and saw the creature was still hunched, and notably closer.

Bonn felt an instinct to run, but emotions weren’t her basis of decision making.

She weighed the options.

All around her adults and children walked, oblivious.

It was not rational to embrace strangers for assistance if none of them could see what she was observing.

Then the creature stood. It was not a dog, but something else, entirely.

Something inhuman and still sentient in its gaze.

It began floating toward her, with its eyes beginning to glow a bright misty red.

No one else noticed as it passed yard after yard, growing ever more horrible as it closed the distance between Bonn and itself.

She decided to not wait to discover more about it.

The moment she closed her front door she saw all of the brightness of day leave as if someone turned the lights out for the entire world.

She flicked on the lights in the foyer, but those flickered out.

She thought of better moments. Of distant dreams.

Screams erupted from outside of the home and the temperature of the room began to decrease.

First to the point of discomfort, then to where she knew her breath was visible.

Bonn stepped away from the door, even though she could not see in the darkness.

She felt her body begin to shake and then a misty fog rolled up from her feet, to her legs, and her abdomen.

A voice through the fog whispered what sounded like, “I’m.”

She closed her eyes as the darkness overcame her, blanketing her with the weight of itself. Pulling her to the ground, and smothering the life out of her lungs.

She tried to stand, then tried with all of the strength within her.

Bonn’s will to fight slowed and slowed. Her mind racing when her body could not, attempting to rationalize the events.

The world emptied as Bonn fell into nothingness and ceased to be.

She recalled recent memories, and saw she was in her bedroom.

She turned her bedside lava-lamp on.

This day she noticed an embossed manufacturer’s logo, Rohalunge.

Something negative tickled at the back of her mind at that name.

She remembered the night prior with her girlfriends. She had drank too much and was somehow the life of the party, dancing on bar tables. Acting inappropriately in public settings.

Everyone laughed with her, though, not at her.

She could still hear the laughter, somewhere.

Or was that the dreams fading away?

No, it was audible laughter. She could hear the laughter of children.

Children’s screams replaced the laughter outside of her home.

There was darkness outside. Blanketing everything.

She stood, feeling the vulnerability of the unknown.

Was she really the life of the party the night prior?

Close to a sexual encounter?

Or was that some sort of falsehood?

She walked over to her window to try to understand what was—a clawed hand slammed into the window with a strength that made the entire room shake.

It scrunched into a spread out fist of sorts, scraping its nails down the glass.

She resisted the urge to scream, forcing her throat to tighten against the impending release of terror. Her pulse thrummed against taught muscles.

The hand slammed on the glass, again.

She walked quickly over to the door of her bedroom.

A booming sound like another hand slammed on her bedroom door, which stopped her movement completely.

She could hear a scratching sound on the other side of the door and a whisper.

Then the hand outside her window slammed on the glass, again, shattering it. Shards exploded across the room, some cutting her skin.

She could feel more than just a presence in her room as a cloud of black fog rolled in over the windowpane.

She backed up against her door, but then it, too splintered as a hand ripped through the wood, grabbing at her.

She allowed herself to scream and once she began screaming she couldn’t stop.

The weight of the creatures covered her.

Bonn thought of Yazzie, the Head Clinician that she worked so closely with.

Yazzie, with her snark.

She could feel something ripping into her.

Tearing deep into her belly. Eviscerated.

Smothering her as her mind raced.

Bonn jumped out of bed and immediately ran to her bedroom door.

She ran down the stairs to her kitchen.

She knew there was a kitchen.

She took out a knife sitting in her drawer next to her sink.

She ran over to the wardrobe near the front door.

It had to be in there.

She was still a clinician. She passed all of the Bio-Corps training, had been hand-selected to go on the most important mission in modern history for her abilities and expertise.

Nothing, not even another world of the past, could take away the root of who she was.

There was no Yazzie to be decisive. To lead.

A medical bag lay under the coats. She grabbed in and put her arms through both straps as she slung it behind her.

She looked outside the front door and saw the black fog begin to roll down the streets.

She saw the backs of all of the homes on her street, but behind all of them was nothing but desert.

A flatland, endless and without vegetation or formations of any kind.

A single stream flowed in the distance, not bordered by any greenery.

Bonn ran away from the dwellings, beginning to feel herself return from the strangeness of whatever was behind her.

She turned around briefly to observe the black fog rolling over the dwellings, including the one that was hers.

Pairs of red eyes appeared all throughout the darkness.

Some crouched on the roofs of homes.

Others peared over fences, brush, and vehicles.

A soft breeze floated words to her from the eyes. Their collective voices were somehow more clear.

Bonn turned back toward the river and ran.