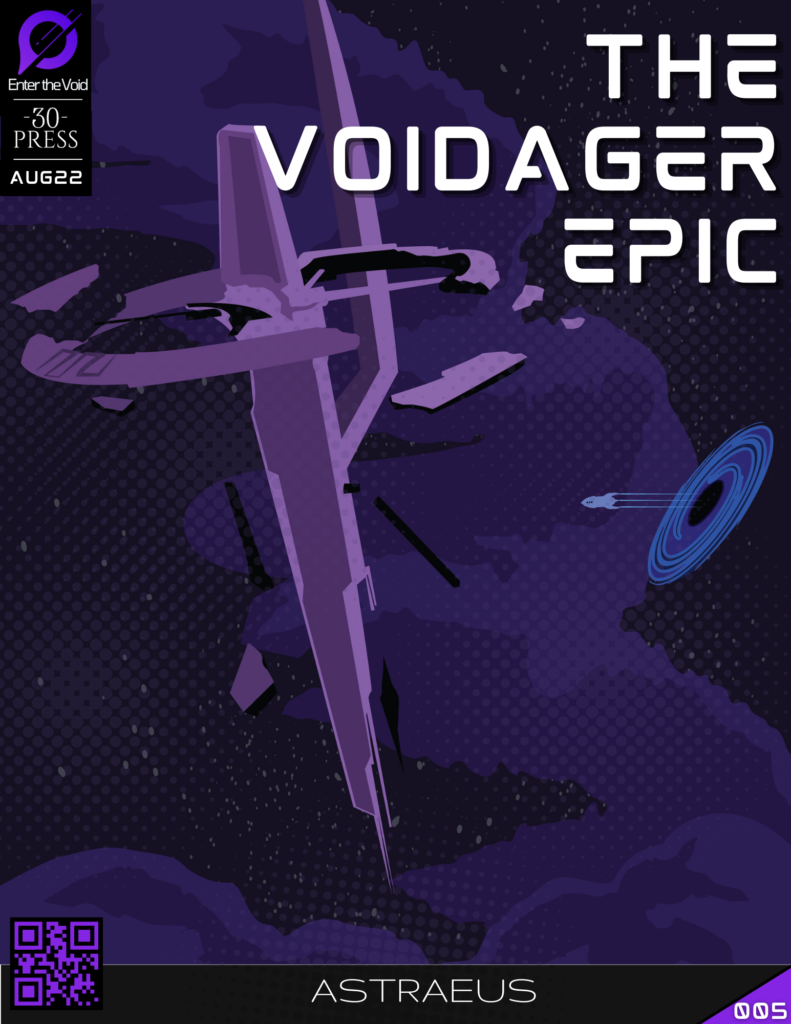 Galaton and Arley watched the station through the Captain’s Quarters viewport, the asymmetrical frame rotating lazily. Galaton had seen her share of space stations on the jump gate ships, all of which—even the models that didn’t need to spin to generate gravity—had a symmetry about the center axis.

But, she wondered, was the symmetrical architecture of stations in the Cygnus Arm to account for their positions in orbit around a larger celestial body?

Galaton peered out the viewport, squinting her eyes to try to see further. There didn’t seem to be any larger bodies on this side of the Void. A few small asteroids, some points of light further off that could have been more stations, but no planets or moons. There seemed to be a sparse smattering of distant stars but, luckily, there were no stars close enough to pose a danger to the Stargazer. The station was just floating alone in the blackness, orbiting nothing.

The station continued its languid rotation to show a large, ragged hole in the smooth central cylinder. The bulkhead around the hole had been deformed outwards like a popped blister.

Galaton felt a surge of recognition.

The station wasn’t intentionally asymmetrical. The small objects spread around the station weren’t ships or distributed components tethered with a line, they were large pieces of debris.

“It’s been destroyed,” she whispered.

“Captain,” Arley said, getting Galaton’s attention. “The CogNet is offline.”

Galaton tested this by attempting to send her visual image to Arley. No effect.

She contacted the bridge and was met with silence.

Right, she thought, no CogNet. We’ll have to do things a little antiquated.

Galaton tapped the Stargazer computer terminal on her desk. She’d probably used a terminal more than most of her crew—PRIME’s reach on the CogNet was wide but it was extended by relays on the jump gates and, where jump gates hadn’t been installed, PRIME couldn’t reach—but it was still strange to interact with a terminal like this. Galaton had only ever contacted another human being with a CogNet direct link or face-to-face with her voice. A call hadn’t been made since ancient times.

“Bridge, this is Galaton. What’s going on with the CogNet?”

“Captain,” DuPont said, “our connection to PRIME was severed as we entered the anomaly. We’re detecting no signal. Without PRIME, there’s no computer to run the CogNet unless we use the Stargazer’s computer for a local network.”

“Understood. Let’s investigate the feasibility of that. Meanwhile, let’s get Ladipo on the observation bridge to give us some insights about the, uh, race or species who may have built this station.“

Galaton felt her lip twitch in annoyance at the distorted voice.

“I’ve got a suspicion about the space station but I’d like to see you on the bridge about it,” Ladipo continued.

“I’ll be right down,” Galaton said before disconnecting and turning back to Arley.

“Arley,” she said. “I know you didn’t mean to hurt anyone. This wasn’t a sabotage attempt.”

“But I can’t just let this go. There have to be consequences for potentially dangerous actions, especially in restricted areas.”

Arley stared blankly at the ground.

“You’re temporarily relieved of duty. Six months. Confined to quarters for 30 days. You will stay here to observe the station and anything else we see in the anomaly. Some of Rad’s people will escort you back to your quarters when you’re ready.”

Meli and Evelynth had been at the back of the observation bridge watching the transit through the Void. Evelynth closed her eyes as the Stargazer approached the anomaly.

“Ev, you might want to see this,” Meli said.

Then they were in the anomaly.

“They’re quiet,” she said. She smiled at Meli. “Finally!”

And then came the frantic shout from one of the navigators on the bridge about Kazumi. He had collapsed.

Meli tugged Evelynth outside the observation bridge by the arm.

“We have to get to Kazumi before anyone else,” he said, his eyes wide.

“The procedure—It.0—is illegal. If Yazzie or her little shadow Bonn gets to him first…” Meli shrugged. “Who knows? But there’ll be hell to pay.”

“Why the hell was he sent on one the longest and most important missions in the last 300 years if being seen by the wrong person is an instantaneous disaster?” Evelynth asked, keeping her voice quiet and glancing around the corridor to make sure they were alone.

“Kazumi wasn’t going to be with us the whole way; he was supposed to observe the anomaly from the inside and then launch the shuttle back to the Cygnus Arm.  There, PRIME could retrieve him and hide him away from the Humanity Council. He can’t decouple the shuttle if he’s unconscious. But, Ev, we need to run.”

They sprinted down corridors, avoiding other frantic crewmen and crew chiefs.

And then a gruff voice called to Meli.

“Jankowicz! Hold it there!”

“See the flanges on the nacelles there?” Ladipo asked.

“Does that look familiar?” Ladipo posed the question like he was teaching students.

“Oh, Verfall” DuPont swore. “It’s the same as what was on the Agamemnon!”

“God, you’re right,” Galaton said. “What the hell does that mean? Rohalunge Corp sent a space station through the anomaly before we were mission-ready?”

“It would seem that way,” Ladipo agreed. “But what troubles me more, Captain, is who attacked them?”

Galaton clenched her jaw and peered out at the—surprisingly human made—space station. A chunk of debris collided with a massive antenna on the main structure and was sent tumbling on a new path.

DuPont looked at his terminal like it was an animal with sharp teeth and a short temper.

Galaton strode over and tapped the screen.

“You are there!” a voice shouted, more static than intelligible speech. It was high-pitched and excited. It could have been an adolescent child. “Is that the Stargazer you’re in?”

“Where did you find the Stargazer? It looks brand new,” the voice ignored Galaton’s question.

“It is brand new,” Galaton said, raising an eyebrow at DuPont, who shrugged in return. “We embarked four earth standard days ago on our inaugural mission.”

“What happened to the crew? Is anyone still aboard?” the voice asked.

“One-Seven, let’s nix the chit-chat,” a second staticky voice intoned. If the first voice was a child, this could have been its jaded older brother.

“Stargazer, we’re coming to escort you away from the Welcoming Committee. Be prepared to lock onto us in approximately 15 minutes.”

“Negative, unidentified ship. I will not be towed.  Please identify yourself or we will  be forced to take a defensive posture”

The second voice sighed. “Stargazer, you’re in the quarantine zone. You need to come out immediately. Please lock on to us when you can or use your impulse drive if it’s still operational.”

“This is Captain Freesia Galaton of the CASC ship Stargazer. We just left the Cygnus Arm. Please identify yourselves,” Galaton demanded.

Then, she added, “And why do you think the Stargazer is damaged? Did a similar ship already come through?” Galaton pictured the Rohalunge nacelles on the station.

Silence over the terminal.

“Stargazer this is One-Twelve and One-Seven of the Homestead Regulators,” the first voice said. “Transmitting identity iey now.”

“Captain,” the second voice said, “you’re less than two hours into your maiden voyage according to the ship’s computer?”

“I don’t know how to say this, Captain Galaton, but we’ve been looking for your ship for over a decade. The Stargazer went missing when I was a kid. One of the reasons I came out to the Void was a hope that I might find the Stargazer and finally answer what happened to the Voidager crew.”